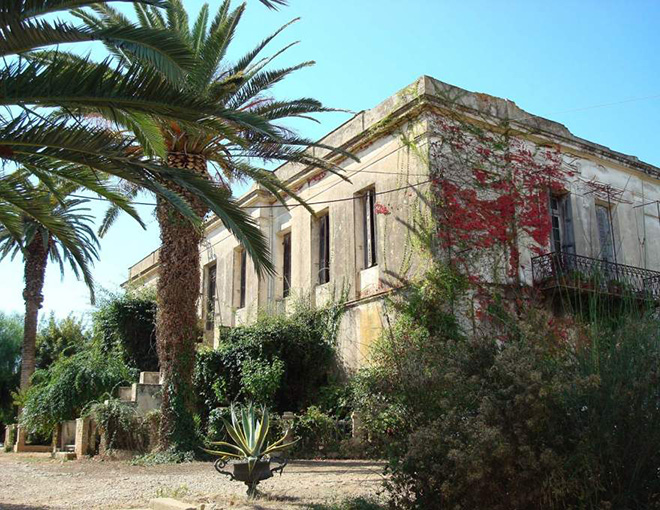 It was an unexpected find. A vineyard producing world-class wines in the Western Peloponnese of Greece on the plateau of the Ichthis peninsula.

It was August. We were visiting Olympia, the UNESCO World Heritage site that’s the birthplace of the Olympics. During the ancient games, athletes smothered their naked bodies with mud to protect themselves from the effects of the broiling summer sun. We opted for a wine-tasting at the Mercouri Estate, 32 kms away.

We drove into the courtyard of a lovely 150-year old Italianate mansion surrounded by tall rows of dark green vines. A tasting had just begun. We joined the group sitting around weathered wooden tables in the shade of spreading umbrella pines. The Gulf of Corinth glimmered below a ridge just a few yards away.

It was a perfect setting. But I left the group to be introduced to Vasilis Kanellakopoulos, Managing Director and the fourth-generation family member to manage the estate.

Theodoros Mercouri bought the land here in 1864, planting the first vineyard with Refosco grapes imported from northern Italy. By the end of the 19th century, wine from the estate was being exported all over Europe. Small seacraft landed at the private dock next to the estate, swung the oak barrels of wine on board and sailed off to Trieste.

In 1930, grand-daughter Leonidas Mercouri laid the foundations of a more modern wine production facility with underground cellar storage for 300 tonnes of wine. The old lady is still alive and resides in the mansion on the grounds. But for the last 20 years, its been the third and fourth generations turn in the barrel and they’ve done even better.

The estate now owns several plantations covering a total of 50 acres. It grows more than 15 varieties of grape of both Greek and international origin. Their wines are shipped all over the world. And they’re now achieving international recognition.

Their flagship is Mercouri Estate, a dry red with an annual production of about 80,000 bottles. But its their small batch whites that have caused taste buds to quiver.

Their 40,000 bottle dry white Foloi brand pressed from grapes in Pisatis has been winning recognition at the annual Concours International du Vin for the last five years. This August the 2008 vintage received a Four Star rating from the UK’s prestigious Decanter magazine.

But their Kallisto brand from vineyards in Ilia is the new super star. It’s “citrus and freshly grated lemon aromas with the scent of pear in the aftertaste” is a winner. The 2008 first and only vintage so far had just received rave reviews, top accolades and a cork-popping Decanter Five Star rating. Unfortunately, only 2,800 bottles were produced and they were almost all gone.

Vasilis is Greek, meaning he’s a warm, gregarious, fun-loving family man who enjoys earning a living from the land he loves. He generously sold me one of his last 12 bottles of Kallisto for seven Euros ($10).

I rejoined the group outside feeling like an ancient athlete. I’d journeyed from far across the sea to Olympia, and the gods had smiled on me. I was returning in triumph with a rare and precious prize.

The US distributor of Mercouri wines is Athenee Importers and Distributors Ltd.