South America – A Land of Superlatives 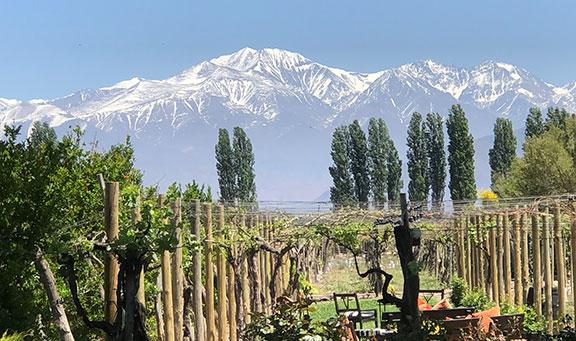 It seemed we were never far from the snow-capped Andes.  The highest mountains outside Asia, they gloriously dominate the landscape standing tall in crisp black-and-white livery outlined against a brilliant blue sky.  Whether we were bumping along a rutted tractor path through the endless vineyards of Mendoza, or watching a gaucho ride off across the grasslands to work herds of cattle, the jagged backdrop of the majestic mountains was always there reminding us of exactly where we were, Argentina.

The first impression of Argentina is size.  South America sprawls across almost 18,000 square kilometers, most of which is in the southern hemisphere and almost half of which is occupied by Brazil.  Next down in size is Argentina, on the southeastern coast, the eighth largest country in the world.

Widest river in the world

We began our journey in Buenos Aires the nation’s cosmopolitan capital, situated on the western shore of the Rio de la Plata, the widest river in the world.  Reaching a maximum width of an unbelievable 140 miles, this watery highway is so wide, it’s impossible to see the other shore most of the time.

In keeping with this huge scale of things, the nation’s capital is a city of monumental buildings, tree-lined streets, immense public squares, and broad, multi-lane boulevards, all reminiscent of an oversized Paris.

The oldest public square in the city is the Plaza de Mayo, the historic beating heart of the metropolis that has been at the center of many of the milestone events in the city’s history.

Around the square are several important buildings including the Metropolitan Cathedral where Pope Francis held mass for 20 years and the Casa Rosada, seat of the national government.  The square has long been the focal point for public gatherings, either in support of or to protest against successive governments, a tradition that reached its apex with the monster crowds that came to hear Eva “Evita” Peron speak from the balcony of the Casa Rosada in the 1940s.

The sophisticated city’s opera house, the magnificent Teatro Colón, is also something of impressive proportions.  The horseshoe-shaped auditorium has 2,500 seats, which is more than London’s Covent Garden, plus standing room for 1,000 more, and six floors above ground and three floors below it.  Many of the world’s greatest superstars have performed here including Luciano Pavarotti who was one among many to claim the theater’s stunning acoustics place it among the top five classical music venues in the world. 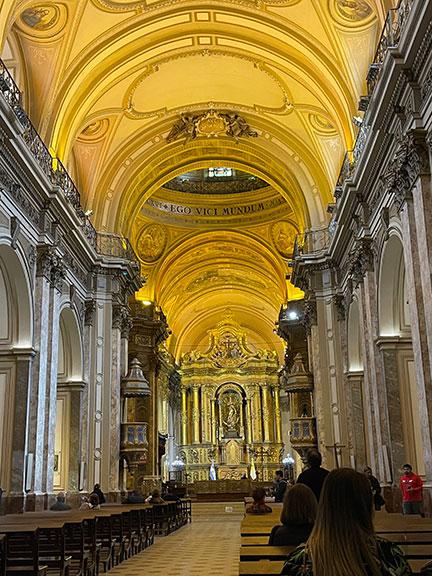 Birthplace of the tango

Superlatives touch almost every aspect of life in Argentina including dance, of course.  Buenos Aires is the birthplace of the tango, one of the most popular dances in the world.  The mesmerizingly seductive partner-dance is synonymous with Argentina where the steamy dance evolved in the late 1800s in dance halls and brothels in the low-class port districts along the Rio de la Plata.  It roared onto the international dance scene in the 1920s. 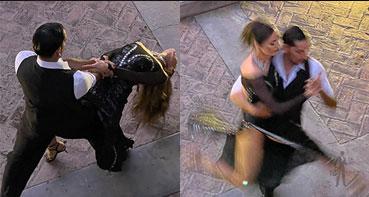 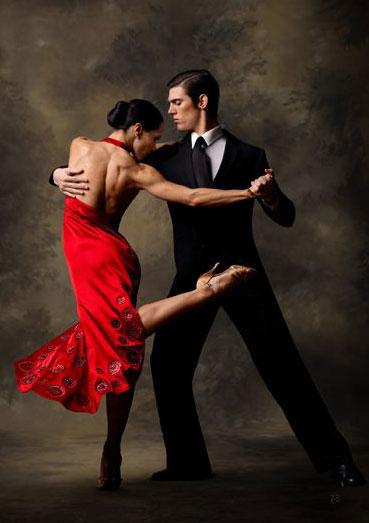 Here in the nation’s capital you can see some of the finest professional tango dancers in the world performing electrifyingly sensational dance moves seldom seen anywhere else, and hear musicians who have raised music and song accompaniment to an art form.  An exceptional evening of such entertainment can be had at Gala Tango, one of the most famous and long-running shows in town.

Gauchos on the Pampas

When we think of Argentina we also tend to think of exceptional beef and the legendary horsemen known as gauchos who corral great herds of cattle on the vast grasslands known as the Pampas.  They’re first mentioned by name in the 18th century records of the Spanish colonial authorities who considered them “the dregs of the Rio de la Plata,” no more than “outlaws, cattle thieves, robbers, and smugglers.”

Today, gauchos, still traditionally dressed in distinctive flat berets draped across their heads, knotted scarves at their necks, and knives stuck in belts or in a leather holster at their side, are hard-working cowboys often leading a rugged outdoor life on horseback in all kinds of extreme weather.  They can be seen patrolling the herds of cattle roaming the rich grasslands that cover five provinces of South America, all of Uruguay and the southernmost state of Brazil, a total expanse of 460,000 square miles.

There are many ways to experience life on an authentic estancia (ranch), watch gauchos demonstrate their exceptional horsemanship and wrangling skills, try horseback riding for yourself, or a typical Argentine barbecue cooked over an open pit. You can find helpful resources online like www.gauchoexperience.com. 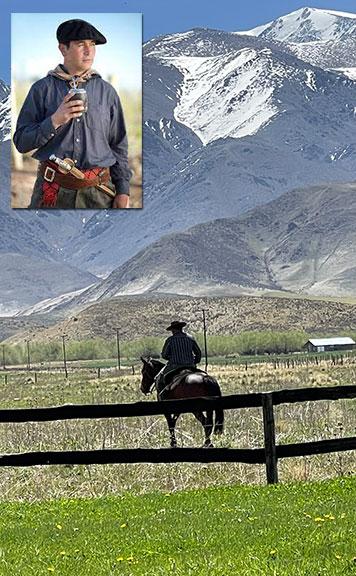 No mention of Argentina could pass without raising a glass to its historic viniculture going back almost 500 years. During the Spanish colonization of the Americas, wine cuttings were brought first to Santiago del Estero in northern Argentina in 1557.  The first recorded commercial vineyard was established there by Jesuit missionaries, followed by an expansion of vineyard plantings into Mendoza three years later.  During this time, the missionaries began construction of complex irrigation channels and dams that brought rich, mineral-laden water down from the melting glaciers of the Andes to sustain the vineyards, as they still do.  Argentina today is the fifth largest wine producer in the world with the province of Mendoza producing more than 60% of the country’s output.

One of the best places to stay in Mendoza and take a wine-tasting tour from is the Cavas Wine Lodge situated in the foothills of the breathtaking Andes surrounded by vineyards. This luxury resort boasts individual retreats among the vines, with each romantic hideaway featuring a private plunge pool, a whirlpool spa, open fireplaces, a spacious double shower, and an upper-floor terrace with panoramic views of spectacular sunsets over the mountains enjoyed fireside with a glass of Malbec.

The sport of Princes and Kings

Of course, the country has many other well-known attractions. Argentina is credited globally as the capital of polo, the world’s oldest known team sport, which has been played here since 1875.  Even if you've never set foot on a polo field and don't know the difference between a mallet and a hockey stick, you've probably heard of Nacho Figueras.  You may not recognize his name but you’ve certainly seen his face.

In part that's because Figueras's ruggedly handsome visage is the face of Ralph Lauren's men's fragrances.  But he’s far more than a polo-playing model.  He's a high-profile friend of princes in this sport of kings and an international ambassador. In short, he's the David Beckham of polo.

Talking of Beckham, it’s not polo but soccer that is the national obsession.  Lionel Messi, the legendary captain of the multi-cup winning Argentinian soccer team, is a national treasure. Widely considered the finest soccer player in the world, he too is featured in multi-media all over the country. His career earnings are over $1 billion making his income as super-sized as the Messi Burger on offer in a Buenos Aires McDonald’s.

One more mega-scale attraction not to be missed is the UNESCO World Heritage site on the nation’s northern border with Brazil.  Iguaçu Falls, dividing Argentina and Brazil, is one of the largest and most famous waterfalls in the world.  Technically, it’s not one but a series of waterfalls, anywhere between 160 to 200 of them, depending on the time of year, plunging together side-by-side over towering basalt cliffs in such powerful volume they fuel no less than three power stations downstream.  It’s significantly wider than Victoria Falls and three times wider than Niagara Falls.

The highest and deepest of the falls is known as Devil’s Throat, an astonishing 300-foot-wide canyon.  Directly facing it is the Hotel das Cataratas, owned by the Belmond Group (think Orient Express), last year verified by Forbes Travel Guide as “One of the finest properties in the World,” with almost every room facing the forever roaring Devil’s Throat.  It’s an unforgettable sight to wake up to giant plumes of feathery spray dancing in the morning sunshine as the waters ceaselessly plunge earthbound just a few breathtaking steps away.

But there’s more.  Set within 40 acres of Brazilian sub-tropical forest close to Iguaçu Falls is the Parque das Aves, the only institution in the world focused on the conservation of Atlantic Rainforest birds. Hundreds of exotic birds of multiple species roost, eat and fly here within enormous, caged enclosures so carefully camouflaged by fauna and flora the structures are barely noticeable.  Visitors following a carefully controlled walkway are allowed to step into one or two of these gated enclosures here and there allowing access to within an arm’s length of some of the world’s most beautiful aviators or within a telephoto length of those too shy to come too close.  Some can be seen perched high in the forest canopy ripping apart a furry lunch.  Some swoop past in a flapping riot of color homing in on a group target in a technicolor squadron, while still others feed nonchalantly in brilliant clusters of yellow and green around trays of seed placed conveniently close to the meandering pathways. 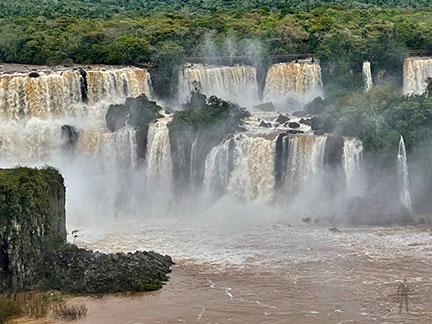 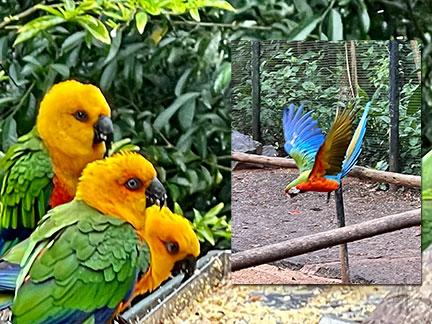 The Toucan, is the world’s most popular bird and practically a national mascot here, which perhaps is why its busily cawing enclosure is kept as a spectacular finale at the end of the route. Toucans can grow up to 25 inches tall and proudly sport a beak as much as eight inches long.  It looks like an awkward bulk that must be painfully heavy to drag around but in fact its hollow.  Charles Darwin thought such a Cyrano de Bergerac protrusion was a sexual lure to attract a mate.  But a new study believes the outrageous structure is an AC unit keeping the bird cool in tropical climates.  In any event, accustomed to their celebrity status, or possibly aware that their stuffed effigies are the hottest item in the gift shop, these adorable toucans have no hesitation in dragging their plump little bodies over to their visitors to be admired.

In fact, there’s much to be admired in this land of superlatives: dramatic mountain landscapes, super-sized rivers and waterfalls. and vineyards and grasslands that reach as far as the eye can see.  The economy is volatile and the politics unstable.  Much of the population is poor, but the natives still enjoy their traditions, their culture and pastimes. And still take time out to enjoy their coffee, food and wine, and music, song and dance that has made their homeland justifiably famous. All of which they are happy to share with open arms. 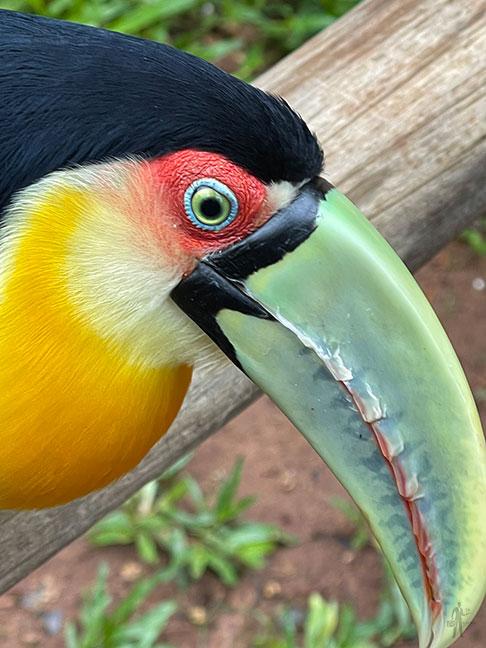