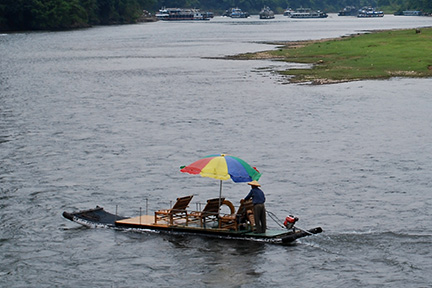 TALE OF THE DRAGON

It was in China that I suffered what I thought was a stroke.  That was frightening enough, but where we were made it even more disturbing. We were stranded overnight in an unknown all-Chinese hotel not of our choice and we were the only Westerners we’d seen for hours.

Paula and I were on our way to visit the Li River Valley, the spectacular UNESCO World Heritage site on the southwestern edge of China.  We’d set off that morning from Lijiang, an ancient Chinese town with 800-year old bridges and waterways in the northwest of Yunnan Provence. We were intending to change planes in Kunming, the capital of Yunnan, for a final flight 473 miles south to Guilin situated on the west bank of the fabled river valley.

We were able to land in Kunming without a problem but going any farther was not on.  A typhoon had slashed across Kunming the previous night flooding the airport buildings.  When we arrived, we had to scamper over planks across the waterlogged terminal to get to higher ground.  All outgoing flights were cancelled. We were going no farther.

Outside the terminal, all was chaos, noise, confusion, milling crowds and clogged traffic, and it was still raining. A Chinaman in a uniform we didn’t recognize, pushed through the crowd toward us. He held a clipboard of names and said something we didn’t understand but indicated a bus with a gesture that we did.  We got on.  Everyone on board appeared to be Chinese. We had no idea where we were going or who we were going with, but we went anyway, leaving our luggage in the hands of the gods.

We weren’t too worried.  Although the bus had no recognizable markings, we guessed it had been organized by our airline. They were shipping us off somewhere until we were able to fly out, our luggage would eventually join us, and all would be fine in the morning. What we didn’t know was it would be two more days before we’d finally get out of town.

We arrived at a nearby hotel, which looked more tired than we were, where someone spoke a little English and we learned the facts. Up in our room, we relaxed.  I slumped back on the bed, when suddenly my body was gripped with pain and I couldn’t move. I was paralyzed, only able to lift my head off the pillow.  Paula hovered, then frantically ran down to the front desk to seek help. I was left starring up at the ceiling with all kinds of thoughts bumping into each other wreaking havoc inside my head.

I thought about weird oriental remedies I’d heard about and the ancient, needle-based pseudoscience of acupuncture.  I wondered if someone would soon burst into the room armed with a quiver of pins, juggling birds’ nest soup and two turtle eggs. I’d seen medical treatment in this country before.  On a Yangtze River cruise earlier, we’d stopped at a small fishermen’s village near the Three Gorges Dam; a seemingly medieval community in the shadow of the largest technological wonder in the world.  When the dam was completed soon after our visit, the village, its old temple and shrines, and dozens like it in the valley were drowned and lost forever.

We explored the ancient settlement walking down a narrow, cobblestone street that snaked parallel to the slow-moving, tea-colored river. Three men sat on upturned crates poring over an improvised game of Go the oldest continuously played board game in the world, more complex than chess.  A woman with a broom looked up and smiled rows of rotten teeth as we passed. Another held a baby over a refuse-clogged gutter while the child peed.

The street was lined with a few ramshackle, open-fronted shops and humble lodgings. Some dwellings had open spaces where windowpanes should have been.  I curiously peered into one taking in a primitive concrete room as grey and grim as a prison cell.

Three or four murky glass jars with suspicious fleshy contents rested on a shelf that was no more than a grey concrete slab protruding from the wall.  In the center of the cold and gloomy room was what looked like an old barber’s chair with stuffing bursting out of a large tear in its seat.  Beside it, was an old metal bucket half-filled with blood and offal.  Above it, was an antique dentist’s drill that might have been used in Marathon Man, the chilling 1976 classic starring Dustin Hoffman and Laurence Olivier as a sadistic dentist.

Remembering that room lying on my back in a hotel bed in Kunming, it occurred to me, that maybe this wasn’t the best country to be in when paralyzed by an unknown cause.

Thankfully, Paula returned with the hotel manager and good news.  Much to our total surprise, not only was there a doctor on the third floor but apparently one with a fully equipped emergency room. They were going to take me there right now. If I’d expected a trauma center bristling with stainless steel instruments shrouded in transparent plastic, I was disappointed.  The reality was it looked decades old, basic and utilitarian, like something you’d expect to find in a Soviet Gulag.  But, under the circumstances, it looked hopeful.

A young, female doctor asked me to lie down on a surprisingly warm cot with a small TV at the foot of it tuned to a Chinese morning show.  She gave me unidentified pills, a shot of something, and I promptly fell asleep.  When I woke up an hour or two later, I felt fine but she wanted to administer something else. She handed me a bowl of creamy, sweet broth and told me to drink it all.  It was yak’s milk, Tibetan survival food long believed throughout China to have many health benefits.

I had a new respect for Chinese medicine. It may seem primitive by western standards, but we know many of their traditional remedies have stood the test of time for centuries.  In any event, I was recovered.

It turned out I had not been a victim of a stroke.  Maybe it was severe indigestion or a spasm of paralyzing cramps.  If the doctor knew, she was unable to explain in English.  So, we never learned what had struck me down, but I did have a long tale to tell from the land of the dragon. 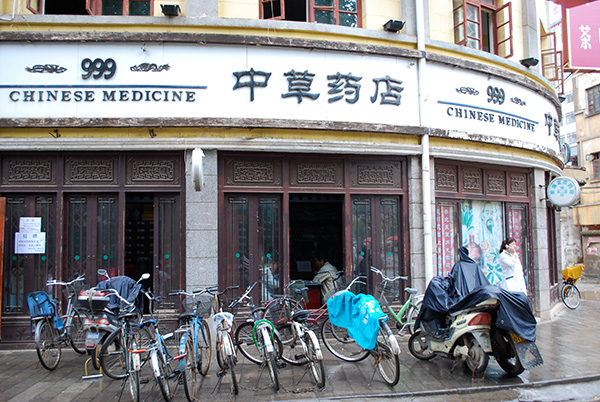